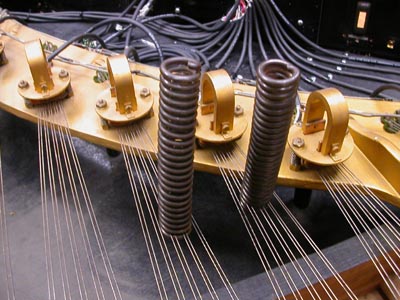 The Neo-Bechstein is an electric grand-piano built in the late 1920s and thus among the first amplified instruments ever. It features 18 humbucker pickups, each covering 5 strings. Much like an electric guitar its acoustic sound is very soft due to the missing resonance board.

The Neo-Bechstein was resurrected by David Balzer, who introduced it to the Berlin music scene in 2002 during a Kryptonale festival. About a year later inside-piano player Reinhold Friedl got interested in the instrument and suggested a polyphonic modification. So in late 2003 I took the job of changing the Neo-Bechstein’s original mono-wiring to an 18-channel setup such that each pickup could be amplified and processed separately.
An immediate benefit was to allow for individual EQ settings and panning, however for us the next logical step was to conceive a dynamic spatialization system with an array of loudspeakers to emphasize the transparency gained from the re-wiring. Here I could build upon the experience from my long involvement in the Topophonien project with composer Sabine Schäfer for whom I had built a number of computer-controlled spatialization mixers.
For this project though, Reinhold Friedl invited me to control the spatialization myself in a live performance, for which I expanded upon some of my older programs. The technical setup is built around two laptops running pd controlled by a faderbox and a touch-sensitive gesture-control keyboard. 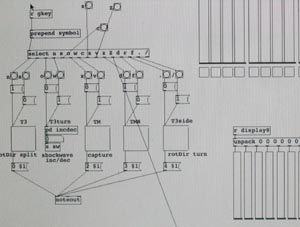 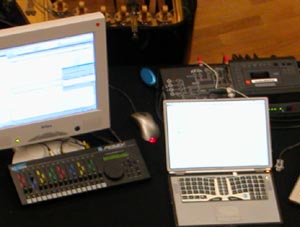 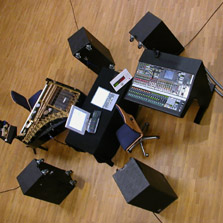 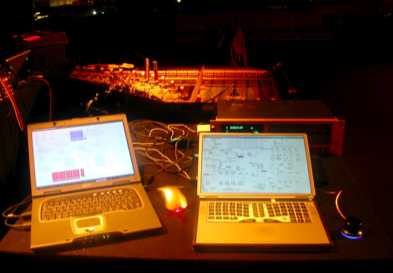 Spatialization performed without faderbox, but only with the gesture keyboard 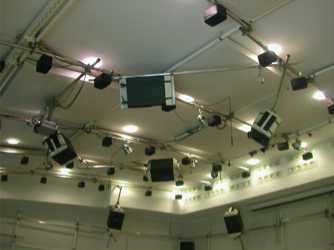 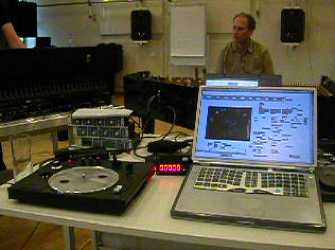 Introduced new spatialization controller based on an old record-player, another “archaic” device and contemporary of the Neo-Bechstein.
Circular movements of sound are coupled with the rotation of the turntable which is not fixed at 33/45rpm but can be manipulated by hand. With the turntable also being a huge touchbutton the controller recognizes when the hand leaves the disk and will then keep spinning at the last speed provided by hand.
Other parameters are controlled by the pick-up’s angle and additional knobs. Gesture keyboard still used for selecting modes and triggering events.